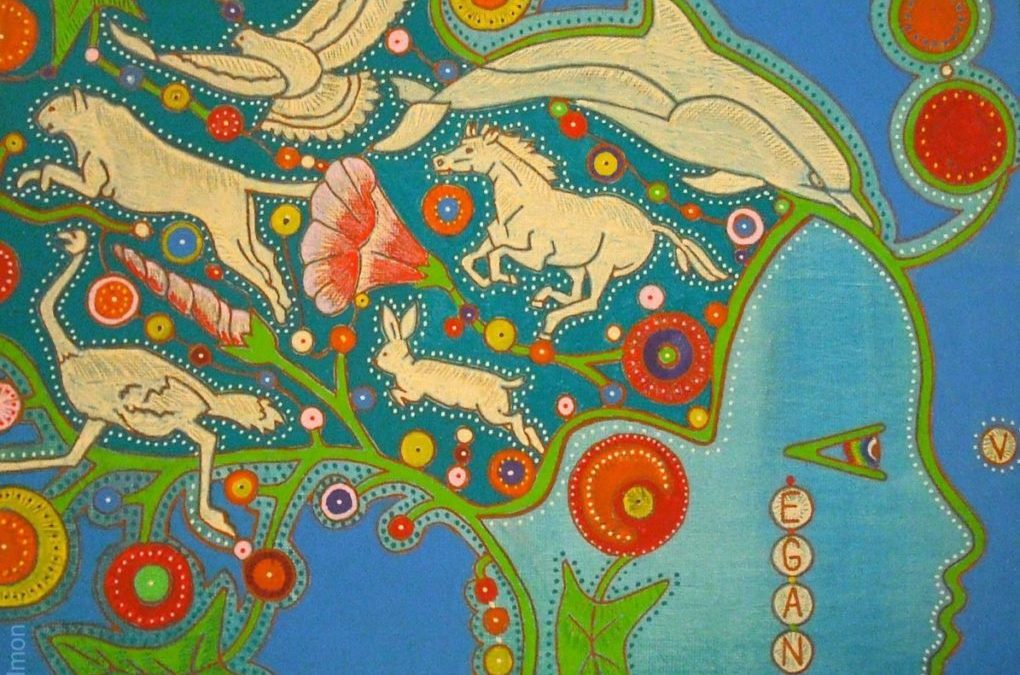 A few months ago, I stumbled upon a painting by Pascale on my Facebook thread. A colourful frame showing a visage in profile, looking like an ancient map full of animals. Those held in cages represented the human brain and the others were free all around. I fell hard for these paintings and I sought to meet with the artist. This is her interview.

Pascale tells us how she turned vegan thanks to a hunter. She speaks about her activism and her passion for art.

The recording is in French with English subtitles.

Thank you for accepting this interview. So the first thing I would like you to do is to introduce yourself in a few words.

My name is Pascale Salmon. I live in Paris. I will soon be 56 years old. I am a vegan and an activist and a painter.

Before speaking about your artistic work, I would like you to tell us when and how you turned vegan

When I was a kid, I was shocked when I saw hunters carrying rifles or fishermen, so I asked myself questions related to this. However, when it came to eating, I didn’t make the connection with what was on my plate. I thought with my stomach

When I was 27 years old, I turned vegetarian after a discussion with a hunter.

Yes, indeed. I was saying that I didn’t understand how one could kill animals. And this man had a good idea. He took a platter with petits fours, saucisson and different things with animal products and he told me that if I was against killing animals I should be vegetarian. And of course I answered no but I got it, I had a revelation. I told myself this is wonderful, I could finally be consistent with my values and the day after, I remember, I went to a bookshop and I bought the only book that I could find, this was vegetarian recipes.

I turned vegan in 2009 when I became aware of the association L214.

This was almost in 2000 that I began to militate. I was in the area of Les Halles (in Paris) and I saw far away people standing around a table and a banner on which it was written ‘French vegetarian alliance’. This was the older name of the current French vegetarian association. And then I ran, I remember. It was a wonderful day for me because at long last I met vegetarian people.

You were no longer alone in the world.

Yes, I was no longer alone in the world. And then I joined immediately and this was when I really started to militate. Actions against vivisection. There were also monthly outings to restaurants. I didn’t miss any of them. I met more and more people but we were only vegetarian. All the activists who I met were vegetarian. I didn’t know anyone vegan. We did not speak about that.

This was also the beginning of the Veggie Prides. They started 16 years ago so indeed at that time. I had already a soul of an activist because I was against discrimination, sexism, racism and homophobia but I never went on the ground to express myself. And there, it was stronger than anything else. I told myself that I had to act so I was at this first Veggie Pride holding a placard and hearing all the people around me starting to chant slogans and shouting through megaphones.

And I was there, quiet, with my placard and after a certain time I told myself if I am here I have to raise my voice otherwise there is no point and then I started very slowly to follow people and I realised at this time that I was not alone. As the days and the years passed, if we were more and more numerous this could be something awesome and we can succeed and I believed, I really believed that things could change.

Wherever we go, animals are everywhere. In fact I think that when we are conscious about that we see them everywhere. I see them everywhere. When I pass a shoe shop I see animals of course, in cosmetic products I see vivisection, restaurant for sure, fur collars. In fact, even without willing it, this is obvious. And we are really moved. And at some point we cannot do anything else other than act, at least me personally, I cannot do differently and in the evening when I go to bed I ask myself “Have you done something today?”

I want the world to change, society to transform as well and I strongly believe in human evolution. In everyone there is something formidable and even if some people have blood on their hands, even if I conformed with this for a long time by ignorance, really by ignorance; I believe in the change.

I was a textile designer for a few years; I also led painting workshops for various audiences. After that, I wanted to paint for me. In the beginning I painted human bodies. Why…I don’t really know.

After, trees and then I made the connection between humans, plants and animals. There were three so it’s funny. I painted mandalas and Buddha’s faces. I had some short trips to India and I was interested in yoga and meditation, which I have practised for many years, and Buddha’s faces, his sculptures, brought me serenity. I think I needed that because of the violence in our society, I needed to be by myself.

And then I wanted to continue always with this outline. Perhaps because regularly during actions and more specifically at information counters I had people in front of me, I only saw their heads and sometimes after having argued, explained the why and the how of veganism and this kind of justice, the person at the end told me ‘I completely agree with you, I fully understand but I love meat too much I will never succeed‘ I asked myself ‘what do they have in their heads?’

What are the techniques you use for your paintings because they are so colourful?

I mostly use acrylic paints and I had to question myself. Paints that I already used for a long time when I was a textile designer but at this time I asked myself about the products.

I discovered that indeed some paints are made with animal products. Carmine from cochineals, Ivorian black from bones, Chinese ink from cuttlefish and many brushes are made with animal bristles and so I sorted out my brushes. We can now find very good-quality synthetic brushes and they can give the same result.

Generally, we prepare our canvas, with a specific material called gesso and three quarters of them are made from rabbit skin glue.

Animals are everywhere, we don’t realise but each time we touch something we can ask ourselves this question. The best way for painting is to use our own pigments, to make our own paint and so we can choose exactly.

I joined a group of vegan artists created by a person named Leigh Sanders. This is called Art of Compassion Project. She proposes to different artists to participate in projects, for example calendars, postcards, and also exhibitions. The sales of the products go to associations which promote veganism or sanctuaries and so on. I find that really wonderful to gather like that and do things together for the animal cause.

I also would like to exhibit but not only with painters but with other people who take pictures for example or participate in an event where people also speak about theatre, cinema, dance… I like to dance very much. I did very little performance.

As an amateur when I practiced Butoh dance. It was on the theme of vivisection. I was with a vegan friend of mine who is a guitarist and we did an improvisation. This really moved me and I really want, whatever the means, I want to do things like that.

I would like to more specifically reach children because I realise that when we are on actions and children come to speak with us, their big eyes open and we feel that they understand very quickly what happens. We often meet children who say ‘I’m vegetarian and I ask my parents but they are not yet but I tell them’ and I find that formidable. And they are the ones who will change the world.

We will end this interview so what would you like to say as a final word for the people who will watch you?

I would like to say that this is definitively the time to be conscious of what we do to animals. If we want a better society we have to be kind, if our values are respect, liberty, justice, empathy, compassion there is one way that leads to this, it is veganism. 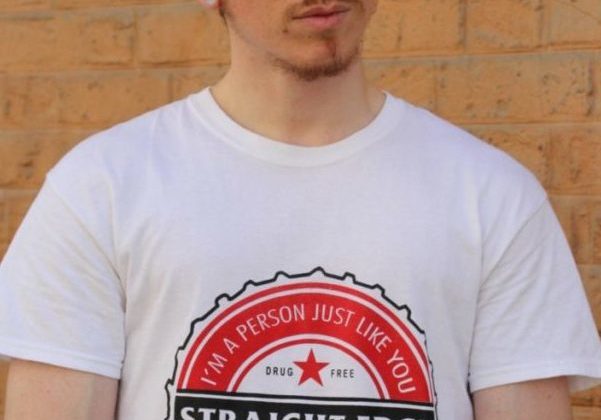 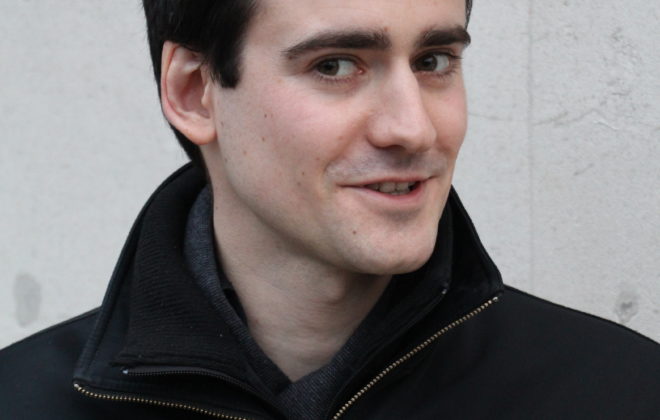 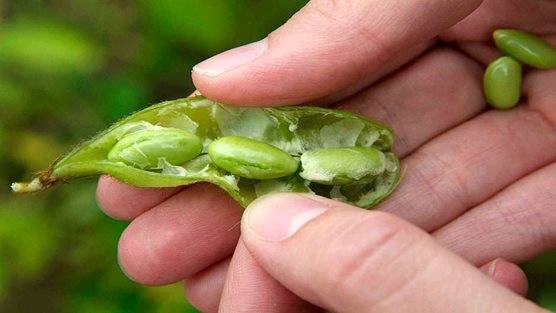